“Alan Nurthen trained me to become comfortable in front of a camera at a critical time in my career. Using those skills I was able to work my way into higher paying jobs and eventually build my own business. If you would like to increase your confidence and become an authority in business, this training will help.”

“Your classes provide excellent value for money as they are highly informative, creative and fun!”

“Just wanted to say thank you for the passion and dedication that you bring to teaching acting. Not only are the classes great value for money but they are the highlight of my week!”

“I wanted to thank you for teaching Charlie. She was going through a difficult stage when she first started the classes. She has told me that you have taught her lots of things about acting, life in general, and have been a positive influence on her. Her confidence alone has increased dramatically.”

“I’ve attended quite a few acting classes at various institutions around Sydney, but I learned more in one day at Screen Actors Workshop than at any other school. Not only are the classes good value for money but they cover vital areas of screen performance and technique that the other schools don’t.”

“I’m really loving the course Alan. You have created such a fun, interesting and dynamic class and I would recommend it to anyone! It is just a joy to be involved in it and I only wish I had started years ago!”

“Thanks Alan! My ongoing career success is due to what I learned from you about acting for the camera.”

Thanks to Alan Nurthen and his amazing school, I have found that the professional training I have received at the Screen Actors Workshop has increased my levels of confidence in public speaking and my ability to think on my feet. Furthermore, speaking in front of a camera has become second nature for me and less intimidating from my experience in your classes. The training from your school has proven to be extremely useful in many aspects of my life, including teaching and public speaking. I will take my learning and experiences from your school with me throughout my life and for this I am very grateful and proud to have been a student of the Screen Actors Workshop.”

The passion, the dedication, and the energy Alan Nurthen puts into teaching his students is truly exemplary!

“Alan’s classes not only secured me a speaking role in the film ‘Muriel’s Wedding’ and numerous television commercials, they most importantly gave me the confidence and skills to fast-track my sales and marketing career.”

“Alan’s classes are a blast! After graduating from the advanced teen class, I played the role of Damien for three years on ‘Home and Away’. Since then, I have performed substantial roles worldwide in film, television and theatre, including ‘Star Wars: Episode 2’. I was also the only Australian actor with a speaking part in ‘The Thin Red Line’, where I had the golden opportunity to work with actors of the caliber of George Clooney and Sean Penn.”

“The life skills and guidance my daughter Natalie received through Alan Nurthen’s acting classes have set her on the right path for a positive journey through life.”

“Alan’s fun, energetic and highly focused classes have given my acting and social skills a much-needed boost!”

“Alan’s classes inspired me to further my career in film-making. I now have a Tropfest-winning comedy under my belt, appeared in ‘Wolverine’, made over 20 short films and recently developed the TV series ‘Strange Fiction’. Thanks Alan! You’re a legend!”

“My daughter Rebecca absolutely loves her acting classes. It’s the highlight of her week.”

“There is an excellent culture at the Screen Actors Workshop and the tutors and facilities are second to none.”

“Alan is a nice guy and a very inspiring teacher. He really knows his stuff!”

“I attended several private tuition sessions with Alan Nurthen to brush up my acting skills – which he surely did. Alan also updated my resume to industry standard, organised a new dynamic head shot for me, produced a show reel and lined me up with a reputable well-connected agent. You’re a legend man!” 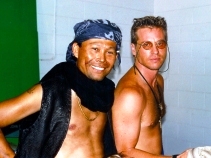 Photo: Agoes Soedjarwo on location with Val Kilmer for The Island of Dr Moreau